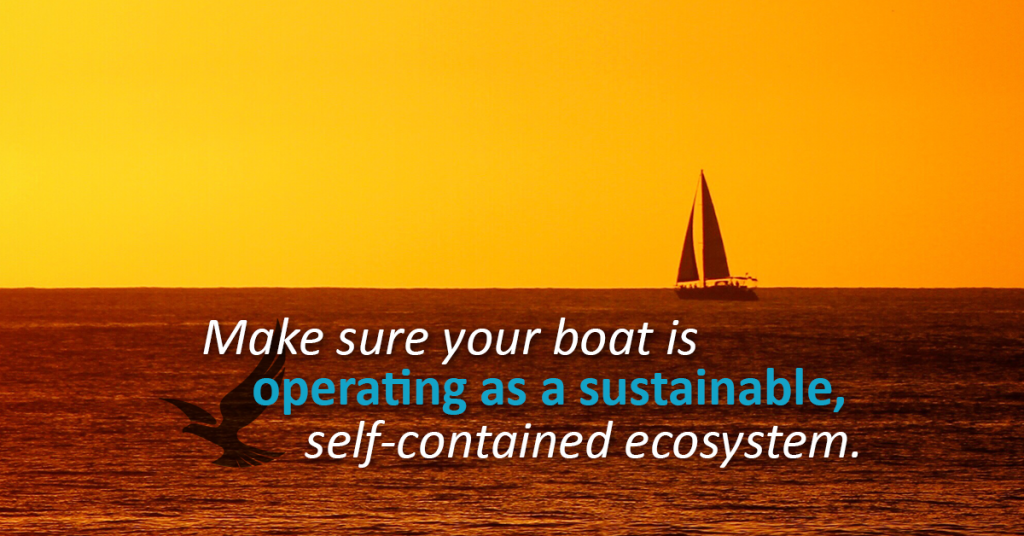 When you’re cruising on a small boat with no immediate support, and help could be days away, hours at best, you make sure your boat is operating as a sustainable, self-contained ecosystem. When I was sailing with my Father and our pet dog Casey, from Brisbane around the top end of Australia back to Perth on a very small catamaran, I learned the difference between being sustainable and going into survival mode.  In my mind, both are quite different and unfortunately in our current climate can be easily confused.

First, you check you have enough food and water on board.  You know and monitor the rate at which you consume those resources.  More importantly, you make sure your system for power and propulsion, sails, rigging, solar panels, fuel and auxiliary engine are all in good order.  Many of these checks are done before you leave port and once again when you are between ports.

One of the lessons that you live by is to allow for a backup or have a reserve.  If it takes you five days to go from Brisbane to Bundaberg with good weather, you will need resources to last you twice as long.  This became apparent to me and my Father when we travelled between Nhulunbuy and Darwin and initially thought the trip would take six days. According to the sailing directions, we would slip through this wonderful tidal channel and low and behold we would be in Darwin before we knew it.

That did not happen.

A trip that should have taken only four or five, possibly seven days, ended up taking well over fourteen. A few close family members wondered if we had disappeared off the face of the earth or been swallowed by a great Leviathan.

Due to the remoteness of that stretch of water, access to radio and other resources were very limited in 2003. We were pretty much on our own. Even if our EPIRB (emergency beacon) was set off at the moment of a catastrophe and we were fortunate enough to make it to land, we probably wouldn’t have survived long enough to be rescued.

Given that realisation and with our travel time increased we moved to a more sustainable approach and changed how our resources were consumed.  Those of you who knew my Father or have ever met him or have ever read his book will understand he loves to fish.  That was one of the ways we managed to supplement our resources and extend our survival time.  So much so that by the time I ever got to a port, the first thing I wanted was a big steak.  I ate the best seafood Australia has to offer on that sailing adventure but never in a restaurant.

We had not expected the wind would die down during our journey especially considering the weather reports and the season.  Being becalmed is not fun on a sailing boat. Overall a lack of wind delayed our journey by seven days. After a day of light wind, we changed our strategy by anchoring and waiting for the tide to change, then when it did, we raised anchor and made some progress.  We wanted to keep some fuel in reserve for emergencies, so after three days we used the dinghy’s outboard motor, rather then the main engine, which enabled us to push our boat along with the right tide.  This worked a treat and after two days we were getting normal wind back.

Eventually, we made it to Darwin but only after many more challenges.  We had to change our strategy a number of times by rethinking tactics and finding new ways of getting to the same goal.   I remember one situation where we had plotted a perfect course through the tidal passages of the Dundas and Clarence Straits between Darwin and Melville Island.  According to the sailing directions, you could do this in twelve to fourteen hours if you got your speed and tides right.  We nearly got run down by a ship taking a short cut outside the marked shipping channel as per the chart. Our solution was to go into shallow water where they could not follow. Dad re-told the story many times of how he shone our spotlight on the bow of the ship.

Either way, we made it through the tidal channel, and it was one of the most awe-inspiring moments of my life. The tide takes command of your boat and you’re moving as though “the Hand of God” is guiding you safely through.  Regardless of your beliefs, at that moment you realise true greatness has nothing to do with people and it’s all about nature.

We had lost time and had to anchor partway through the passage and wait another twenty-four hours for the tides to change and currents to flow in the right direction.  Ready to go again, I had the best course plotted to see us through a narrow reef channel two to three kilometres wide. But when we were one kilometre from exiting the channel, the wind changed and what should have taken twenty minutes took three hours.

In the end, we finally got through and sailed into Darwin the following morning. A five to six-day trip ended up being fourteen.

So, what does that have to do with survival mode versus sustainability?

It was true throughout the journey we went into survival mode. Many times, our actions and decisions and reactions to the situation were just about staying alive. Unfortunately, when you go into survival mode many people just focus on surviving, they don’t think about what comes after. 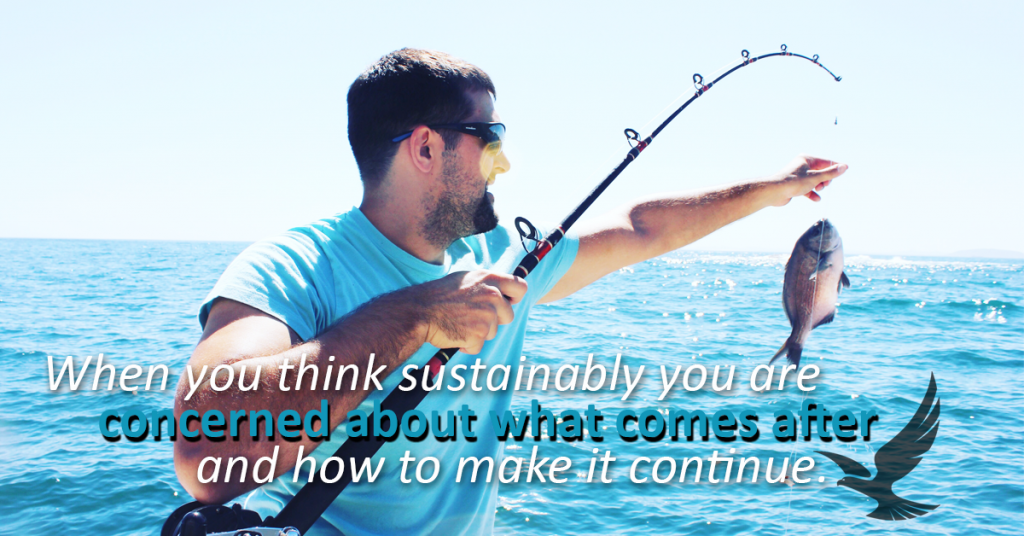 When you think sustainably you are concerned about the long term and not just surviving. During our journey sustainability was thinking about our boat, our vessel, our cherished vehicle that was getting us through this amazing journey.  We had a plan, charts and goals established for the task at hand.  However, when we went into survival mode, we never lost sight of the long term goal, which was to enjoy the journey and get home safely.

Unfortunately, in our current environment, I see many businesses falling into survival mode and in so doing they’ve sunk the ship in hopes of a rescue.  Now, while I can’t judge because I wasn’t on the ship (so to speak), what I can say is maybe as business owners we need to rethink our way forward, what’s our solution, what’s our strategy. How can we survive but keep the ship afloat?
Questions to ask yourself could be;

We often joke, ‘I just need some quiet time to catch up and then my life would be easier’.
Now is the time.

What will you do with this gift of time? Will you clean up all your admin work, bin all the paperwork, delete the emails, enjoy your family, video conference with friends? Imagine this was a holiday for four weeks, but you must stay home.  How would you approach the situation?
Now I get it, the cash question will always be there and if you are not able to access the government packages, perhaps I can help connect you with people who can help.

Now to practical applications. What should you be doing?  The first thing I point out is I’m not telling people what to do, I’m just sharing ideas and if you think they’re good ideas and you think they can work for you, brilliant.  If you think these are bad ideas and you see no value in them even better still because now you’ve just discounted the ideas that you know won’t work for you. However, here are some more thoughts on sustainability that could be worth considering.

Do you have well-documented systems processes and procedures for your customer services?  It’s easy to bring on new staff when you have clarity and purpose.  If you’re like most business owners that stuff lives in your head.  More importantly, you don’t need to do it alone if you’ve already got staff. Video connect or call or have a sit down one and a half metres or more apart and ask them, what needs better processes or more clarity.

If you’re a retailer, why not bring forward June 30 stocktake.  If you’re able to access your workplace with a small number of people or if you’ve got reduced customers and staff capacity utilise the time to count, clean and clear. What jobs or tasks can be brought forward to utilise staff capacity?

Can technology enhance your business model?  Dream up a list of what you may need. Don’t think about what’s possible, think about what you would choose if you had no limitations, because that’s how good ideas are born.

What are the growth opportunities you can see or plan for after the crisis, when life and business start to return to normal. This is a unique situation, which may present unique opportunities if you are willing to see them. Is now the time to do things differently?

It’s all well and good to put this stuff down on paper or in a blog and theory sounds easier than practice. Ultimately it comes down to mindset if you think it’s possible then it probably is.  Really what is the worst thing that can happen now? Alien invasion, cats rising up and enslaving us all, non-stop talent shows? When I was sailing around Australia my goal was to get from Brisbane back home to Perth. Based on other people’s experiences I thought it would only take me a month and a half. It took over four and a half months and my journey was unique and my own.  Many times, I thought I would have liked to have had a bigger boat, better weather, more time, but I adapted and thrived on the challenges and enjoyed the journey.  I was grateful for what I had, grateful for time with my Dad and worked out better ways of using our resources. 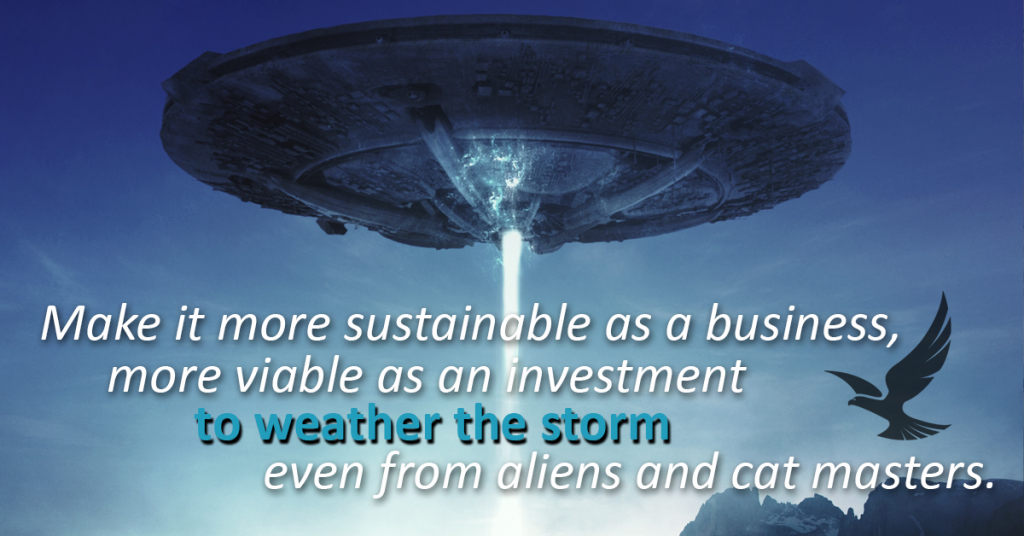 So, what kind of business owner are you going to be?  Are you going to close and then watch as your resources, years of knowledge and experience dwindle away?  Or are you going to work out how you can be ready for when growth returns, how you can change your model so it’s helping people and adding value?  Make it more sustainable as a business, more viable as an investment to weather the storm even from aliens, cat masters and twenty-four-seven talent shows.

If you would like to know more about how the team at Eagle Shared Services can help your business please connect with Darren Ellis on  LinkedIn.